A blue spark to shine at the origin of the universe. 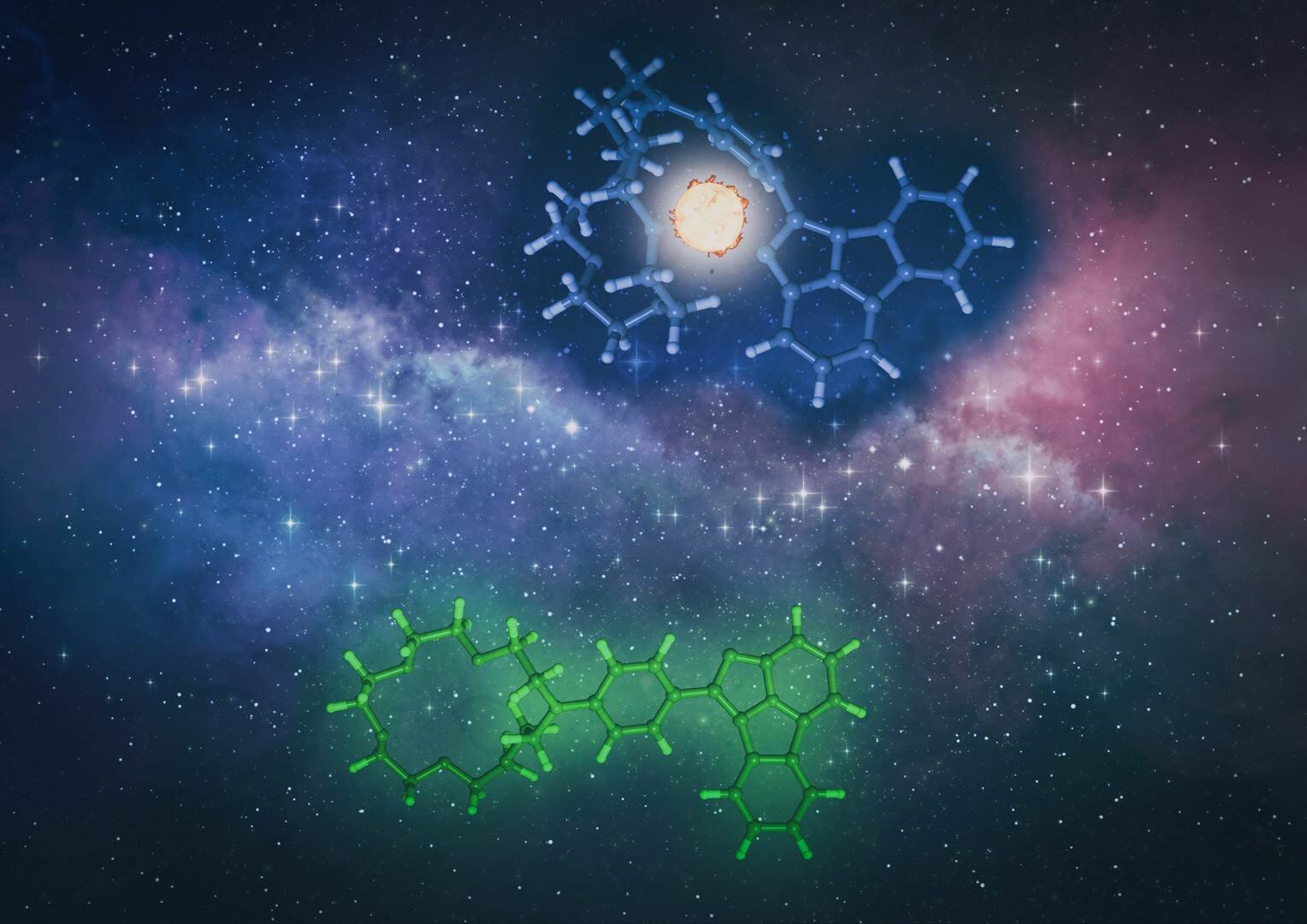 An interdisciplinary team of scientists led by researchers from DIPC, Ikerbasque and UPV / EHU, has shown that it is possible to build an ultra-sensitive sensor based on a new fluorescent molecule capable of detecting the key to nuclear decay to find out whether or not a neutrino is its antiparticle itself.

The results of this study, published in the prestigious magazine. NatureThey have great potential to determine the nature of the neutrino and thus answer fundamental questions about the origin of the universe.

Why is our universe made of matter? Why does everything exist as we know it? These questions are linked to one of the most important unsolved problems in particle physics. This problem is that of the nature of the neutrino, which could be its own antiparticle, as the unfortunate Italian genius Ettore Majorana argued almost a century ago. If this were so, it could explain the mysterious cosmic asymmetry between matter and antimatter.

In fact, we know that the universe is made almost exclusively of matter. However, the Big Bang theory predicts that the early universe contained the same amount of matter and antimatter particles. This prediction is consistent with the “small Big Bangs” that form in proton collisions at CERN’s giant LHC accelerator, where symmetrical production of particles and antiparticles is always observed. So where did the antimatter of the early universe go? A possible mechanism points to the existence of heavy neutrinos that were its own antiparticle and could therefore decompose into matter and antimatter. If a second phenomenon occurs, called charge and parity violation (that is, if the neutrino slightly favors the production of matter in its decomposition over that of antimatter), it could have injected an excess of the first over the second. After all matter and antimatter in the universe were wiped out (with the exception of this small excess), the result would be a cosmos made only of matter, from the leftovers of the Big Bang. We could say that our universe is the remnant of a shipwreck.

It is possible to demonstrate that the neutrino is its own antiparticle by observing a rare type of nuclear process called double neutrinoless beta decay (bb0nu), in which simultaneously two neutrons (n) in the nucleus transform into protons (p) while two electrons ( e) are emitted outside the atom. This process can occur in some rare isotopes, such as Xenon-136, which has 54 p and 82 n in its nucleus, in addition to 54 e when it is neutral. The NEXT experiment (led by JJ Gómez-Cadenas, DIPC and D. Nygren, UTA), located in the Canfranc Underground Laboratory (LSC), searches for these decays using high-pressure gas chambers.

When an Xe-136 atom undergoes a spontaneous decomposition of bb0nu, the result of the process is the production of a doubly charged ion of barium-136 (Batwo+); with 54 e and a nucleus formed by 56 p and 80 n; and two electrons (Xe à Batwo+ + 2e).

Until now, the following experiment has focused on observing these two electrons, whose signal is very characteristic of the process. However, the bb0nu process to be observed is extremely rare and the expected signal is on the order of one bb0nu decomposition per tonne of gas per year of exposure. This very weak signal can be completely masked by background noise due to ubiquitous natural radioactivity. However, if in addition to observing the two electrons, the ionized barium atom is also detected, the background noise can be reduced to zero, since natural radioactivity does not produce this ion. The problem is that observing a single Ba iontwo+ In the middle of a large bb0nu detector it is technically so challenging that until recently it was considered essentially unfeasible. However, a series of recent works, the latest of which has just been published in the journal Nature, suggest that the feat may be feasible after all.

The work, conceived and directed by researchers FP Cossío, professor at the University of the Basque Country (UPV / EHU) and scientific director of Ikerbasque, and JJ Gómez-Cadenas, professor Ikerbasque at the Donostia International Physics Center (DIPC), It includes an interdisciplinary team with scientists from DIPC, UPV / EHU, Ikerbasque, the Optics Laboratory of the University of Murcia (LOUM), the Center for Materials Physics (CFM, a joint CSIC-UPV / EHU center), POLYMAT and the University of Texas at Arlington (UTA). Gómez-Cadenas says: “The result of this interdisciplinary collaboration that combines, among other disciplines, particle physics, organic chemistry, surface physics and optics, is a clear example of the commitment that DIPC has recently shown to develop new lines of research. The purpose is not only to generate knowledge in other fields, different from the usual ones of the center, but also to look for hybrid terrains and to create interdisciplinary projects that, in many cases, like this one, may be the most genuine. “

The research is based on the idea, proposed by one of the authors of the article, the prestigious scientist D. Nygren (inventor, among other devices of the time projection camera technology applied by many particle physics experiments, including NEXT) . In 2016 Nygren proposed the feasibility of capturing Batwo+ with a molecule capable of forming a supramolecular complex with it and providing a clear signal when this occurs, thereby producing a suitable molecular indicator. Nygren and his group at UTA then went on to design “on-off” indicators, in which the molecule’s signal is greatly enhanced when a supramolecular complex forms. The group led by Cossío and Gómez-Cadenas has followed a different path, designing a bi-color fluorescent indicator (FBI) that combines a high intensity enhancement and a dramatic color change when the molecule captures Batwo+. The FBI synthesis was carried out under the direction of the DIPC researcher I. Rivilla. If a barium-free FBI molecule is illuminated with ultraviolet light, it fluoresces in the green light range, with a narrow emission spectrum of approximately 550 nm. However, when this molecule captures Batwo+, its emission spectrum shifts to blue (420 nm). The combination of both characteristics results in a spectacular improvement of the signal, which makes it very suitable for a future Batwo+ detector.

It is interesting to note that the experimental multiphoton microscopy systems used in LOUM by P. Artal’s group for green / blue spectral detection are based on those previously developed to obtain images of the cornea of ​​the human eye in vivo. This is an example of intertwining the use of a world-only technology for biomedical applications in a fundamental problem in particle physics. “The effort to combine basic science and new instrumental implementations is essential to open new avenues of research to answer the many questions that scientists ask ourselves every day,” says JM Bueno, professor of optics at LOUM.

As Cossío has explained, “the most difficult task in the chemical part of the work was to design a new molecule that would meet the strict (almost impossible) requirements imposed by the following experiment. This molecule had to be very bright, capture the barium efficiently extreme (bb0nu is a very rare event and no cation can be wasted) and emits a specific signal that would allow capture to be detected without background noise. In addition, the chemical synthesis of the new FBI sensor had to be efficient to have enough ultrapure samples for installation inside the detector. The most rewarding part was verifying that, after much effort by this multi-disciplinary team, our specific and ultra-sensitive FBI sensor was actually working as intended. “

In addition to the design and characterization of the FBI, the article offers the first demonstration of the formation of a supramolecular complex in a dry medium. This historical result has been achieved by preparing a layer of FBI indicators compressed on a silica sediment and evaporating on it a barium perchlorate salt. Z. Freixa, professor of Ikerbasque at UPV / EHU says: “The preparation of the FBI in silica has been a quick but not so dirty solution for this proof of concept. A little bit of domestic alchemy.” The vacuum sublimation experiment was carried out by the CSIC scientist at CFM C. Rogero and his student P. Herrero-Gómez. Rogero, an expert in surface physics says: “It was one of those moments in Eureka, when we realized that we had only the tools in my laboratory to carry out the experiment. We evaporated the perchlorate and the FBI glowed blue almost the first try.”

The next step in this research project is the construction of an FBI-based sensor for the detection of double beta decay without neutrinos or bb0nu, for which Gómez-Cadenas, F. Monrabal of DIPC and D. Nygren and collaborators of UTA are developing a proposed concept.

This work is a significant advance towards building a NEXT ‘barium-labeled’ experiment to search for noiseless bb0nu events through the identification of the two electrons and the barium atom produced in the reaction. This experiment would have great potential to discover if the neutrino is its own antiparticle, which could lead to answering fundamental questions about the origin of the universe.

Provided by the University of the Basque Country