A 5,000-year-old cemetery and graveyard have been found in Poland 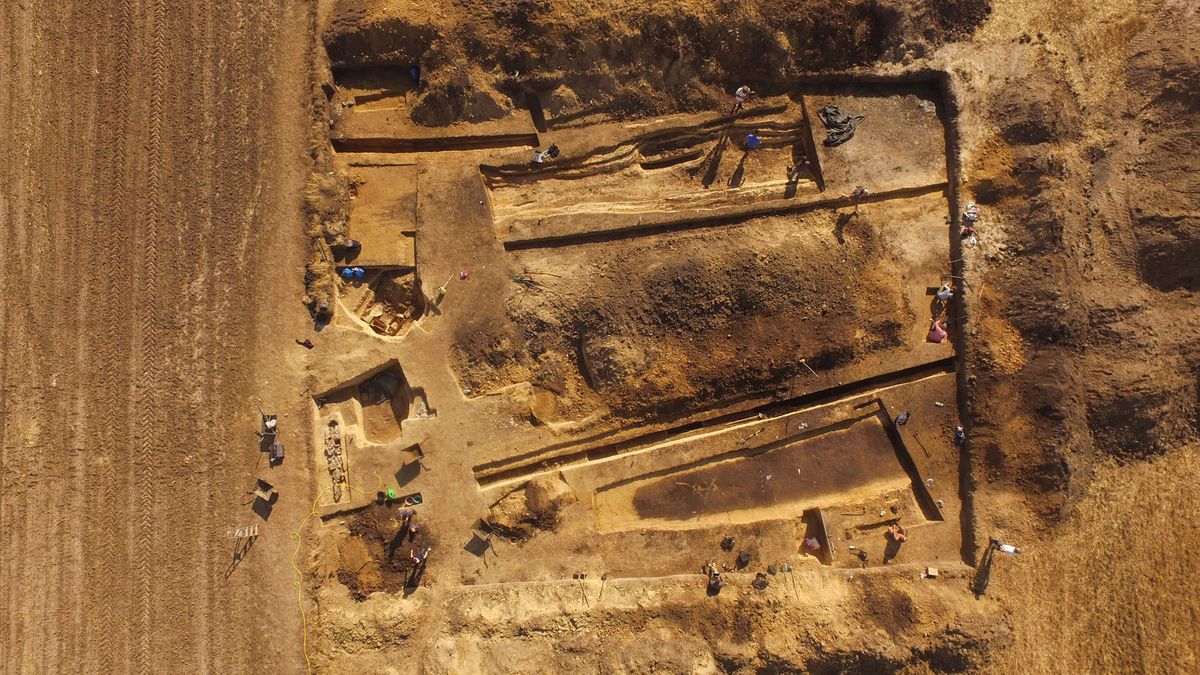 Archaeologists have unearthed a 5,000-year-old complex of long burrows and stone-lined tombs in Poland after examining crop lines in the area seen in satellite photographs.

Archaeologists began excavating a rural site about 30 miles (50 kilometers) northeast of Krakow, more than two years ago. They have now unearthed seven Neolithic tombs, as well as the remains of early medieval gerries and two horses for the Bronze Age burial. But the full extent of the ancient cemetery is not yet known.

Related: In the photo: ‘monster burial’ found in Poland cemetery

Archaeologists now estimate that there are a dozen barrow mounds, between 1 feet0 feet and 1 feet0 feet (meters0 meters and meters0 meters) each, now made of rubble, stones and wooden pillars that have now rotted. They believe it is the embodiment of the area’s prehistoric settlement by the Neolithic funnel beaker people, named after the special pottery they made and are believed to be the first farmers in Europe.

“The megalithic cemetery in Debni is the largest and most interesting site of its kind in Central Europe,” archaeologists Markin Prozabia and Jan Bulace told live science in an email. “It provides us with an extraordinary burial of funnel beaker culture.”

Bulas, an independent archaeologist from Krakw, first noted that straight lines appear in satellite photographs of farms – the result of subtle differences in crop growth – may be due to underground remnants of a four-sided structure.

Bulas and Presibia visited the site and used magnetic gradiometers to measure small changes in the Earth. Magnetic field And declare where the underlying land was disturbed in the past.

The four-sided shape that Boulas saw in the satellite photograph was the earliest medieval gear from the ninth and 10th centuries and was rocked in 1025 before the first state of Poland was established.

But excavations in 2019 and 2020 also revealed neolithic long barrows, believed to be about 5,500 years old, that the medieval fort was inadvertently built.

However, they have now merged into the landscape, but once the barrows were higher, Prosbia said. Science in Poland. They were built by the ealing throat of the earth above the lined tomb of the central stone, and reinforced with palisades of wooden pillars; The poles are now crumbling and only traces of their post-holes remain.

Researchers have yet to find any skeletal remains in the central tombs, but they have found traces of Neolithic burials in the earth’s crust, they said.

Prisbia and Bulace told Live Science that the archaeological team also recently discovered a tomb at a site where two horses were kept together and buried with part of the tomb. They have given this tomb about 3,500,000 years ago in the middle of the Bronze Age in this region.

Funeral beakers, who built the ancient barrow near Debbie, spread to Central Europe around 100100 BC.

It is believed that they farmed what is now migrating to the territories of Spain and France, and that they themselves were descendants of people who migrated from the Balkans, where they adopted farming methods from the Far East.

Archaeologists have unearthed long barrow cemeteries built by funnel beavers in Poland, Germany, and elsewhere in southern Scandinavia. In the central Polish region of Kujavi there is one of the most famous hiding places in the forest – cemetery stones are often called Polish pyramids.

But it is believed that the ancient cemetery near Debini may be one of the largest complexes of funnel beaker barrows ever found, Prozibai said.

Archaeologists plan to continue their excavations to learn more about the Neolithic burrows and tombs and the remains of the medieval fort and the remains that first drew them to the site.

So far, archaeologists have found no evidence that G is permanently inhabited – they believe it may have been a military camp – and no such structures have been found in Poland.

Prisbia and Bulace said it was a “unique discovery” that would help study the fortification techniques used during the ninth and tenth centuries, a turbulent time in Polish history.