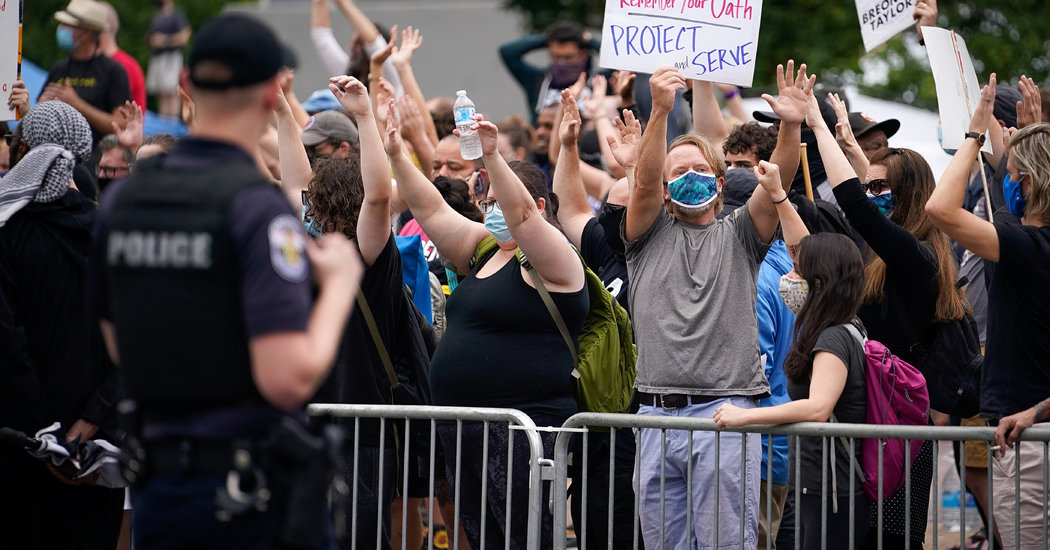 One man was killed and another person was injured in a shooting Saturday night in a park where protesters against police violence have been gathering for weeks in Louisville, Kentucky, authorities said.

Videos posted online showed a man standing on the edge of Jefferson Square Park firing more than a dozen shots that sent protesters seeking refuge among tents and park benches.

A man died at the scene, and another person who was shot was found across the street in the Justice Hall and taken to a hospital with non-life-threatening injuries, the Metro Police Department said. Louisville in a statement.

Police cleared the park to investigate the shooting. “Detectives are trying to gather as much information as possible to identify everyone involved in the incident,” police said. There were no indications of arrests.

“I am deeply saddened by the violence that erupted in Jefferson Square Park tonight, where those who have been voicing their concerns have gathered,” said Greg Fischer, the mayor of Louisville, on Facebook. “It is a tragedy that this area of ​​peaceful protest is now a crime scene.”

Louisville has been at the center of protests against police violence that followed the death of George Floyd, a 46-year-old black man, in police custody in Minneapolis last month.

Mr. Floyd’s death refocused on Breonna Taylor, a 26-year-old African-American emergency room technician, who was shot and killed by Louisville police who were carrying out a search warrant in her apartment. Mrs. Taylor and her boyfriend, Kenneth Walker, were in bed when officers entered after midnight. Police were executing a so-called no hit order, allowing them to enter without identifying themselves. Police have said they called and identified themselves, a claim disputed by Ms. Taylor’s family.

During the encounter, Mr. Walker fired his gun, hitting an officer in the leg, and the police opened fire, hitting Ms. Taylor at least eight times. The order was issued as part of a drug investigation, but no drugs were found in the apartment.

Louisville police fired one of the officers who opened fire, Brett Hankison, saying he violated his policy on the use of deadly force by firing “wildly and blindly” 10 shots at Ms. Taylor’s apartment. The Louisville city council also voted to ban the arrest warrants, a measure known as the “Breonna Act”.